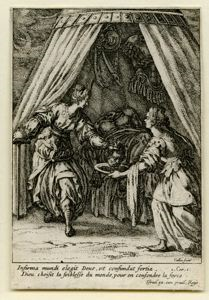 Judith with the Head of Holofernes

The story of this small print is from the Old Testamentâs Book of Judith. Here the elegantly dressed Jewish prinÂ­cess Judith, sword in hand, places the newly severed head of the Assyrian general Holofernes on a charger proffered by her young handmaiden. By this act, Judith courageously freed the Jewish people from persecution. The two women move vigorously in the space, while the generalâs decapitated body lays snugly in his tent canopy bed or pavillon, his armor hanging impotently from the ceiling. The story of Judith and Holofernes was a very popular subject in the Baroque period, although one rarely tackled by Callot.

A great innovator in etching techniques, Callot used stippling, or a dotting of short lines, made entirely with the etching needleâs point, to create shadow and texture. He abandoned stippling soon after this print in favor of other techniques.

Your current search criteria is: Portfolio is "Baroque Art" and [Objects]Country is "France".