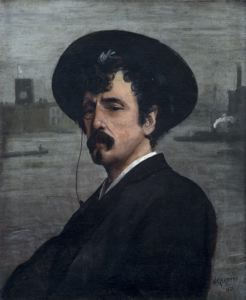 One can imagine James McNeill Whistler posing for this portrait, seated on the balcony of his London flat overlooking the Thames River. But the circumstances surrounding the paintingâs origins are shrouded in mystery. During the 1860s and 1870s, Walter and his brother Henry Greaves were ardent students of Whistler, assisting with major commissions such as the Peacock Room. However, their relationship became estranged in the 1880s, and Walter Greaves fell into poverty, though he continued painting portraits of Whistler from memory. Following the discovery of rolls of canvases at a London pawn shop, the Goupil Gallery offered Greaves an exhibition in 1911, requiring him to sign and date many of the paintings retroactively. While the exhibition was a success, the detection that a key painting had been misdated ultimately led to a scandal, raising questions about the chronology as well as authorship of some of the paintings.

This was one of 14 paintings by Greaves that were purchased by the Rosenbach Museum co-founder Philip H. Rosenbach in 1911, which he was unable to resell due to the scandal. In 2010, with the approval of its Board of Trustees, Rosenbach Museum and Library deaccessioned all of its paintings by Greaves, auctioning off all except one that they considered the finest, which they gifted to La Salle University. It is a fascinating example of British Aestheticism, highly evocative of Whistlerâs work, with an interesting and enigmatic history.

Conservation
- 2011 - Conserved with Support from the Irwin Nat and Marjorie M. Pincus Endowment and the Art Angels
For more information: http://artmuseum.lasalle.edu/exhibits/show/conservation-treatments/paintings/whistler-by-the-thames
Keywords Click a term to view the records with the same keyword
This object has the following keywords:
Portrait
Portfolio List Click a portfolio name to view all the objects in that portfolio
This object is a member of the following portfolios: