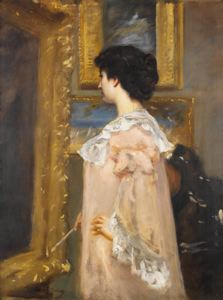 Portrait of an Artist in Her Studio

Carolus-Duran was a friend of avant-garde painters, but his more academic style reflects his decision to pursue lucrative commissions as a society portraitist. His work combines elements of contemporary Impressionism with more conventional painting techniques. The artistâs use of quick, loose brushwork owes at least as much, however, to Spanish old masters such as Diego VelÃ¡squez, whose work Carolus-Duran greatly admired, as to contemporaries such as Edouard Manet. The model for Artist in her Studio is believed to be the artistâs wife, Pauline Croizette, who declared her profession as an artist on their marriage certificate and continued to exhibit works in the Salon after their marriage.