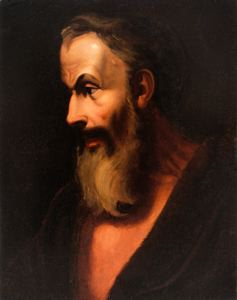 Benjamin West was born in a Quaker settlement in Springfield, PA. His parents encouraged his artistic talents, and by the age of 15 he was already known for his portraits. In 1760, West sailed for England where he would soon develop an international reputation like no other American artist. West was the first American to study art in Italy, and he embraced the popular Neoclassical style of Europe. Through his close ties with England and patronage by George III, West became president of the Royal Academy of Arts in London. He was very fond of his American heritage and always kept an open door for American artists who wished to study in Europe. He became the teacher of up-and-coming American artists like Gilbert Stuart and Charles Willson Peale.

Conservation
- 2015-2016 - Conserved with Support from the Stockman Family Foundation
For more information: http://artmuseum.lasalle.edu/exhibits/show/conservation-treatments/paintings/profile-head

- 2009 - In need of conservation - Included in IMLS survey
For more information: http://artmuseum.lasalle.edu/exhibits/show/conservation-surveys/drawings/profile-head-----study
Additional Images Click an image to view a larger version

Your current search criteria is: Portfolio is "Paintings-American" and [Objects]Century is "18th Century-19th Century".