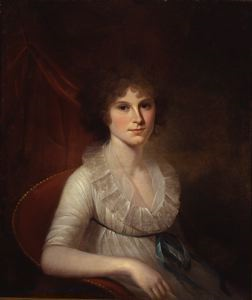 James Pealeâs early career was interrupted when he was commissioned to serve in the Maryland Regiment during the Revolutionary War. Afterwards, he moved to Philadelphia and worked together with his brother, Charles Willson, creating miniatures while his brother painted large-scale oil portraits. After 1810, failing eyesight forced Peale to abandon miniatures for larger formats. The sitter in this oil portrait is Ann Emily Rush, whose father was Benjamin Rush, a signer of the Declaration of Independence. Peale conveys Ann Emilyâs intelligence and self-confidence with her direct gaze and upright posture.
Current Location: Art Museum : 19 C Gallery