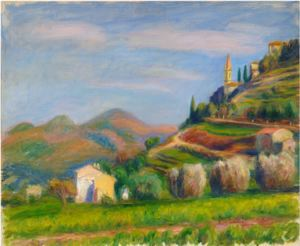 Glackens shared a studio with fellow member of the Eight and Ashcan, artist Robert Henri, in Philadelphia in 1894-5, before both visited Europe and moved to New York City. Glackens was Chairman of the Armory Show selection committee, the first President of the Society of Independent Artists, and a strong influence on the renowned Philadelphia art collector, Albert C. Barnes, for whom he was a consultant in his acquisitions of French Impressionist and Post-Impressionist Art. From 1925-32, Glackens lived and worked in France. After his Ashcan period, he developed an interest in Auguste Renoirâs colorism, apparent in Hillside at Cannes, and became less interested in urban scenes and more interested in rural landscapes.
Current Location: Art Museum : 20 C Gallery