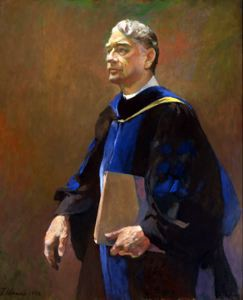 Br. Danielâs lifelong love of art was fostered during weekly visits to the Carnegie Museum in Pittsburgh when he was a young boy. With his love for art steadfast, he introduced the art history major to La Salleâs curriculum in 1963. In 1965, following an Honors Convocation where famed American painter Andrew Wyeth and art collector Lessing J. Rosenwald received honorary degrees, Br. Daniel announced the Collegeâs intention to build a permanent art collection. Over the years, he bought carefully, accepted gifts of artwork, and traded up wiselyâdeveloping the art collection to serve the educational needs of a âteachingâ museum.

The artist, James Hanes, was a founding member of La Salleâs Fine Arts Department. He was also instrumental in growing La Salleâs art collection. He served as an early acquisitions advisor, and often arranged funding and donations for the collection.
Current Location: Art Museum : Main Hallway