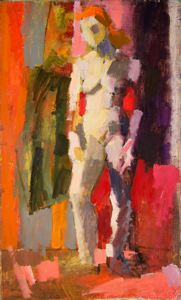 
Object Type: PAINTINGS
Creation Place: North America
Medium and Support: Oil on canvas
Credit Line: Gift of Joseph N. Gennett
Accession Number: 94-P-413
Thomas was born in Columbus, GA, grew up in Washington, DC, and earned a B.A. from Howard University in 1921. In 1924, she began a 35 year career teaching art at a D.C. junior high school. Teaching allowed her to support herself while pursuing her own painting part-time. Thomas became an important role model for women, African Americans, and other artists. She was the first African American woman to have a solo exhibition at New Yorkâs Whitney Museum of American Art in 1972, and she exhibited her paintings at the White House three times.

In Female Nude Standing, Thomas presents a painterly sketch of a nude woman using white colors surrounded by vibrant patches of reds and oranges. Thomasâ early artworks were representational, though her Howard University professors challenged her to experiment with abstraction. Female Nude Standing was created when Thomas had just begun to experiment with abstraction. It was not until she retired from teaching in 1960 and was able to concentrate on her artistic career full-time, that she finally developed her signature abstract style.

Conservation
- 2013 - Conserved with Support from the Stockman Family Foundation
For more information: http://artmuseum.lasalle.edu/exhibits/show/conservation-treatments/paintings/female-nude-standing

Your current search criteria is: Portfolio is "Paintings-American" and [Objects]Century is "20th Century" and [Objects]Display Creator is "Alma Thomas".