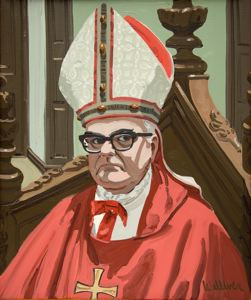 Welliver grew up in Millville, Pennsylvania. After graduating from the Philadelphia College of Art, he studied at Yale University under Joseph Albers, whose abstractions influenced his early work, and whose range of color he employed in his later work. Welliver began teaching at the University of Pennsylvania Graduate School of Fine Arts in 1965, and later became chairman of the department until his retirement in 1989. He is best known for his large-scale landscape paintings of rural Maine,

This portrait of the Bishop of Portland, Maine, was commissioned by a committee headed by Philadelphia Inquirer art critic, Victoria Donohoe, and exhibited at the Exhibition of Liturgical Arts, held at the 41st International Eucharistic Congress in Philadelphia in 1976.
Current Location: Art Museum : 20 C Hallway

Your current search criteria is: Portfolio is "Paintings-American" and [Objects]Century is "20th Century" and [Objects]Display Creator is "Neil Welliver".