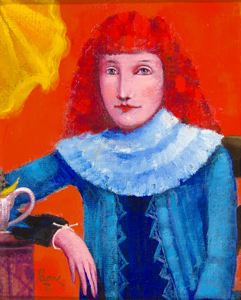 Growing up in South Philadelphia, Paone was exposed and influenced by the traditional Mummers Parade. Little Girl depicts a child in a clown-like costume with a vibrant background. The saturated tones of blue, orange, and red create a chromatic environment much like one would see in the traditional folk parade.
Current Location: Art Museum : 20 C Hallway

Your current search criteria is: Portfolio is "Paintings-American" and [Objects]Century is "20th Century" and [Objects]Display Creator is "Peter Paone".