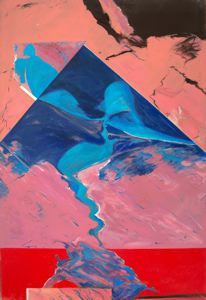 The Tree of Life (From Images of Jewish Continuum)

The intention of the artist was to embrace the epic of a living people from an evolving culture spanning 4000 years. The references as translated into abstracted symbols span both traditional and contemporary responses to Jewish history and Old Testament narrative. The panels are placed to be read from right to left, as in the Hebrew language. It shows a fusion of eternal symbols of earth, sand, sky, and Jewish symbols of a talit (the white and blue-violet prayer shawl), and shofar (the silhouetted ram's horn on the right base edge of the blood-red sky). The final image, Contemporary Israel, is an obscured star of David, housed within a Torah, the law and the first five books (Pentateuch).
Current Location: In Storage

Your current search criteria is: Portfolio is "Paintings-American" and [Objects]Century is "20th Century" and [Objects]Display Creator is "Robert Koffler".