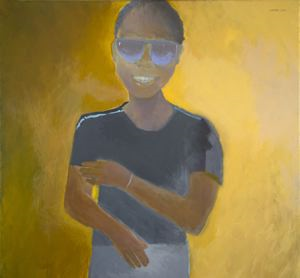 Brantley was born in Philadelphia and graduated from Simon Gratz High School in 1963. He then enrolled in the Pennsylvania Academy of the Fine Arts (PAFA), but after one semester he was drafted into the US Army and served in Vietnam. Upon returning to Philadelphia, he completed his studies at PAFA in 1971, then he went on to take classes at the Philadelphia College of Art and the University of Pennsylvania. After finishing his studies, Brantley entered a career in public service with the Juvenile Justice Division in Philadelphia and served as a recreation leader at the Youth Study Center from 1974 until 1998. Today, Brantley works as a full-time artist who is known for his evocative portraits of friends, family, and other artists. This painting depicts his young granddaughter Zouri.
Current Location: Art Museum : 20 C Hallway

Your current search criteria is: Portfolio is "Paintings-American" and [Objects]Country is "United States".