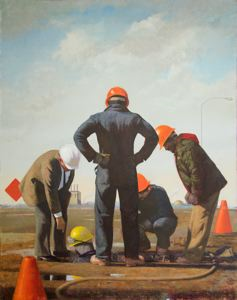 
Object Type: PAINTINGS
Creation Place: North America
Medium and Support: Oil on canvas
Credit Line: Gift of the Artist
Accession Number: 85-P-307
This painting focuses on the activities of contemporary construction workers, exploring an underground cavity in the earth. As in Jesus at the Festival of Shelters, it depicts an area in Philadelphia around 8th and Vine streets that is under construction. Early in his painting career, Bartlett executed a number of large-scale paintings devoted to the working-class man that stand as an homage to his common, essential, but often overlooked role in society. Here the strength in the composition comes from the forceful triangle formed by the African American workers, rather than from their white supervisor who bends down on the left.

The title reinforces the notion of a monumental and important subject, though one with ambiguous overtones of destruction as well as renewal. One of the earliest sketches for this painting suggests something more somber: the workers are lifting, apparently exhuming, a body from the excavation. The painted and actual blood (accidentally spattered from a cut on the artistâs hand) on the bottom of the supervisorâs pants leaves a provocative and enigmatic symbol. Another small detail is in a lighter vein: the very tip of the supervisorâs pointing finger is reflected in the puddle beside him.

Your current search criteria is: Portfolio is "Paintings-American" and [Objects]Display Creator is "Bo Bartlett".