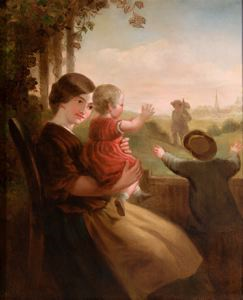 Harriet Cany Peale was the second wife of Rembrandt Peale. In 1840 he and Harriet married, and she also became his student and assistant. In that same year she began exhibiting her work in Philadelphia at the Pennsylvania Academy of the Fine Arts and the Artistsâ Fund Society, and continued to exhibit regularly throughout the rest of her life. She has been associated with the Hudson River School of painting, and is primarily known for landscapes, portraits, and still-life, as well as copies of her husbandâs and other artistâs works. She frequently collaborated with Rembrandt Peale on copies of his famous âPortholeâ painting of George Washington (Patriae Pater).

Conservation
- 2014 - Conserved with Support from the Stockman Family Foundation and the Art Angels
For more information: http://artmuseum.lasalle.edu/exhibits/show/conservation-treatments/paintings/father-s-return
Portfolio List Click a portfolio name to view all the objects in that portfolio
This object is a member of the following portfolios:

Your current search criteria is: Portfolio is "Paintings-American" and [Objects]Display Creator is "Harriet Cany Peale".