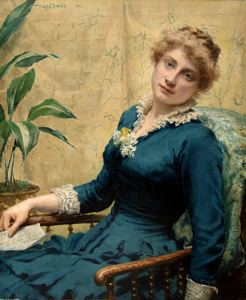 Brooks is known primarily for her oil portraits and flower paintings. She studied at the South Kensington and Royal Academy Schools in London before opening a studio in Montreal, then moving to New York. The artist had a knack for evoking emotions from her subjects. The Quarterly Illustrator (1893) quoted her as telling one sitter, âYou have a hundred facesâ¦ Now we will talk awhile until you get around to the one I want.â

Exhibition reviews in the Montreal Gazette (April 1885) titled this painting âFar, Far Awayâ because, âIt is that of a young girl, who, having just read a letter from her sailor lover, is thinking tenderly of him, and it can be seen at a glance that she is regretting that he is so far, far away.â Also, Goupil & Co., who printed photogravures of this work, titled it âI Wonder if He Really Means It.â

Your current search criteria is: Portfolio is "Paintings-American" and [Objects]Display Creator is "Maria Brooks".