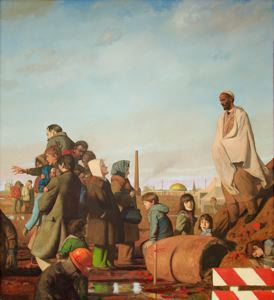 Jesus at The Festival of Shelters (Feast of Tabernacles)


Object Type: PAINTINGS
Creation Place: North America
Medium and Support: Oil on canvas
Credit Line: Gift of St. Luke's Episcopal Church, Kensington, Philadelphia (Episcopal Diocese of PA)
Accession Number: 88-P-351
This large panel painted for the sanctuary of the former St. Lukeâs Episcopal Church in Kensington represents a passage from St. Johnâs Gospel (VII: 1-44) in which Christ visits Jerusalem during the last Jewish festival of the calendar year, the Feast of Tabernacles or Shelters. Here the artist interprets the biblical story in contemporary terms, including painted portraits of St. Lukeâs former pastor, the Reverend Clifford Cutler, and several parishioners. As in Cratermen, the background depicts an area in Philadelphia around Eighth and Vine Streets, with the Ukrainian Catholic Cathedral and the steeple of St. Michaelâs Church (where La Salle College commenced in 1863). The figure of Christ, who stands on a mound of earth on the far right, is presented as an African American man, a modern rabbi, wearing a Roman clerical collar.

This rendering suggests the unity of our diverse humanity. The tents in the background refer to the shelters erected in the desert at the time of the Jewsâ exodus from Egypt, while the telephone poles evoke the cross. As in the biblical story of Jesus in the Temple, the people in the crowd here have varied reactions. Some are oblivious to Christâs presence; others are doubtful; and a few already believe and commit themselves. Despite its complexity, the dynamic grouping of people is directed towards the elevated figure of Christ, isolated against a wide expanse of sky. He preaches amid a scene of industrial destruction, hopefully soon to be followed by renewal. The inclusion of a construction worker by the pool of water in the foreground (a self-portrait of the artist) refers to the words spoken by Christ in St. Johnâs Gospel (VII: 37-38), âIf any man thirst, let him come unto me and drink. He that believeth on me as the Scripture hath said, out of his belly shall flow rivers of living water.â

Your current search criteria is: Portfolio is "Paintings-American".