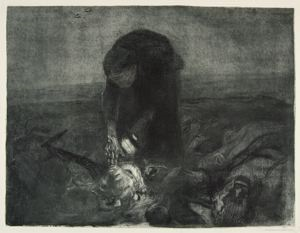 From 1903-1908, Kollwitz worked on a series of seven prints that was based on an historical event, the German peasant's revolt of 1522-25. Exploited by their feudal masters, the peasants rose up to protest their situation. The noblemen united to squelch the uprising, yet not before the peasants killed a number of their oppressors. The work of theologian and historian Wilhem Zimmermann, who wrote the General History of the Great Peasant's War [Allgemeine Geschichte des grossen Bauernkrieges], probably inspired the series. As in the Weaver's Rebellion, Kollwitz lays the blame for the event on the workers' miserable working and living conditions. Yet, she takes this one step further focusing on the process by which the individual develops a consciousness of his suffering a desire to change his fate. The series was made out of order and later arranged to compose a rough narrative sequence.

Here, Black Anna is seen from the front, bending over a dead figure. Again, the artist focuses not on the face, but on the woman's large hands, which gently caress one of the slain workers.

This print is a "re-strike", an impression printed after the original edition was no longer available. The re-strike is pulled from the original plate, but someone other than the artist or original printer was responsible for making the impression.
Current Location: Storage : Works on Paper : Drawers : D2

-Kathe Kollwitz, Curated by Caroline Wistar, La Salle University Art Museum, October 10 â November 20, 1988.
Dimensions
Portfolio List Click a portfolio name to view all the objects in that portfolio
This object is a member of the following portfolios: