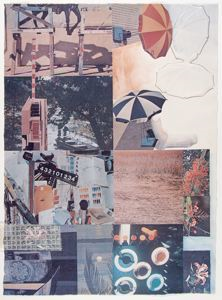 Robert Rauschenberg used GI Bill funds to study painting at the AcadÃ©mie Julian in Paris. There he met Susan Weil (briefly his wife) whom he followed to Black Mountain College, where he studied under Josef Albers. The Bauhaus-inspired curriculum encouraged an openness about what constituted art, what materials might be used, and how artists might collaborateâlessons that Rauschenberg would carry throughout his career. Rauschenberg claimed to have an "insatiable curiosity" and worked in many artistic areas, including painting, sculpture, performance, technology, photography, and printmaking. He also loved to collaborate, saying, "It seems that in theater and printmaking, every individual that you add to a project will result in ten times as many new possibilities."

Rauschenberg gave two of his prints the same title, More Distant Visible Part of the Sea: one from 1979 featuring scissors, and this one from 1983 featuring umbrellas. He often included images of umbrellas, parasols, and parachutes in his art, at least as far back as the mixed media âcombineâ work, Charlene, from 1954. By the time he created this print, he had left the frenzy of New York City for the tranquility of Captiva Island, Florida. The serenity he found may be reflected in some of images used in this work, such as the sunset and the native flora represented.

- Teaching and Learning in the Art Museum: La Salle University Faculty Selections, La Salle University Art Museum, September 10 - December 14, 2018.
See the online exhibition HERE: http://digitalcommons.lasalle.edu/faculty_selections_2018/.
Dimensions
Portfolio List Click a portfolio name to view all the objects in that portfolio
This object is a member of the following portfolios: