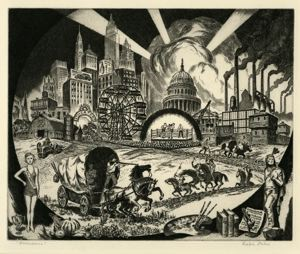 By 1943, the WPA/FAP had come to an end. U.S. involvement in WWII had helped to create jobs so the federal governmentâs assistance through WPA programs was not as necessary. Some artists and critics questioned the genuine artistic expression of art created through government programs, and Abstract Expressionism eventually dominated the art scene. Artist Stuart Davis criticized the art of Regionalists and Social Realists in a 1939 essay:

Domestic naturalism, the chicken yard, the pussy cat, the farmerâs wife, the artistâs model, Route 16A, natural beauties of the home town, etc., became the order of the day in painting. And on the reverse side of the popular trend toward domestic naturalism were found the more trying aspects of manâs struggle with nature and society, such as the picket line, the Dust Bowl, the home-relief office, the evicted family, etc. In mural painting it wasthe same thingâAmerican history-in-costume,
cowboys and Indians, frontier days, picturesque industrial landscape, etc.; and on the other hand, Mexican muralism, the allegorical worker of bulging muscle and Greco-Roman profile, the fetish of fresco, etc. â¦ What happened to the Armory Show and modern or abstract art?

Ralph Fabriâs 1948 print, Americana, has it all. The U.S. Capitol dome shines in the center of the American scene, between towering smokestacks and skyscrapers of industrial cities and factories. A boxing match, the innovation of the electric lights of the theater, the Ferris wheel, and a car advertisement sit just beyond the cowboys and Indians of the frontier, and the hardworking farmer cultivating the land. Miss America, the artistâspalette, books and music, frame the scene.

Fabri, born in Budapest, Hungary, immigrated to the U.S. in 1921, and became a naturalized citizen six years later. What do you think about the artistâs intention in Americana? Is it a celebration of American culture and American art? Is it a criticism, or a send-up, a spoof, of the American Scene?