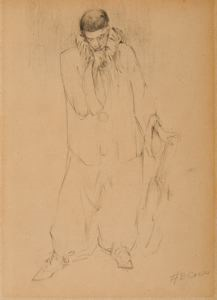 Harlequin was a popular Post-Impressionist subject. Carlesâ drawing of Harlequin is fairly academic and was likely executed prior to his sojourn in France. It does not indicate the Modernist turn his work would later take. After his death, his work was featured in major exhibition retrospectives in Philadelphia and New York.

Conservation
- 2015-2016 - Conserved with Support from the Stockman Family Foundation
For more information: http://artmuseum.lasalle.edu/exhibits/show/conservation-treatments/drawings---watercolors/harelequin

Your current search criteria is: Portfolio is "Drawings-American" and [Objects]Century is "20th Century" and [Objects]Display Creator is "Arthur B. Carles".