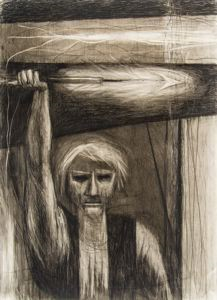 Spruance was a Philadelphia painter and printmaker based in Germantown. He studied painting at PAFA, and in his senior year he won a scholarship which enabled him to travel to France. He taught at Beaver College (now Arcadia University) and the Philadelphia College of Art, and was known for his innovations in color lithography. This drawing was the basis for a lithograph called The Burning Harpoon, published in 1968 as part of a set of 26 fine art lithographs illustrating Herman Melvilleâs novel, Moby Dick: The Passion of Ahab. This set of haunting images was among the final works of Spruance, who died before the project was completed.

- Moby Dick: The Passion of Ahab, La Salle University Art Museum, March 20 â May, 1989.
Dimensions
Portfolio List Click a portfolio name to view all the objects in that portfolio
This object is a member of the following portfolios:

Your current search criteria is: Portfolio is "Drawings-American" and [Objects]Display Creator is "Benton Murdoch Spruance".