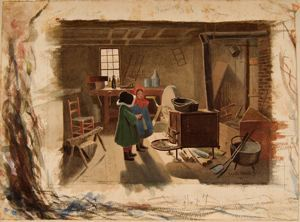 Warming the Hands at Play

Wood was a Quaker painter who lived and worked primarily in the Germantown area of Philadelphia. From the 1860s onwards, he also spent summers in the Adirondacks near Elizabethtown, New York. He studied and exhibited at PAFA and the National Academy of Design. Like many of his colleagues, he was influenced by the writings of English artist John Ruskin, who promoted life studies of nature. Wood was a member of the Philadelphia Sketch Club, and he became known for his landscapes and genre paintings, such as this watercolor rendering of children warming their hands near a wood-burning stove.

- Recent Acquisitions, Curated by Caroline Wistar, La Salle University Art Museum, September â October, 1989.
Dimensions
Portfolio List Click a portfolio name to view all the objects in that portfolio
This object is a member of the following portfolios:

Your current search criteria is: Portfolio is "Drawings-American" and [Objects]Display Creator is "George Bacon Wood Jr.".