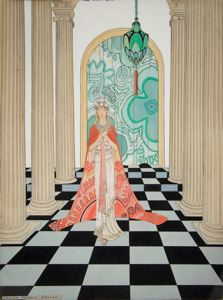 From early on in life, Sterrett had a passion for art. While in high school she received a scholarship to attend the Art Institute of Chicago. She received her first commission from the Penn Publishing Company to illustrate Old French Fairy Tales (1920). She was 19 years old and had recently been diagnosed with tuberculosis. She was soon commissioned to make illustrations for another book, Tanglewood Tales, by Nathaniel Hawthorne. Unfortunately, while her art was on the rise, her health was on the decline; and her illness greatly affected the rate at which she could complete her drawings. She left commissions uncompleted at her death in 1931.

Sterrettâs illustrations for the Tanglewood Tales reveal the influence of European design styles such as Art Nouveau and Art Deco. Art Nouveau (also known as Jugendstil), which reached the height of its popularity from 1890 to 1910, was inspired by organic forms, such as plants and flowers, and emphasized harmony with nature. In contrast, the Art Deco style, which developed around 1915 and became influential in the 1920s and 1930s, employed a more geometric visual language celebrating industrial order and embracing modern technologies. In Cadmus Saw Harmonia, the vertical columns and the checkerboard-patterned floor emphasize the ordered nature of Cadmusâ palace, while the flowers on Harmoniaâs cloak and on the curtain of the arched doorway highlight the beautiful appearance of this royal stranger described in Hawthorneâs story of âThe Dragonâs Teeth.â


- American Originals: Works on Paper from the Permanent Collection, Curated by Dr. Klare Scarborough and La Salle University Associate Professor of Art History Dr. Catherine Holochwost, December 16, 2015 through March 4, 2016.
Portfolio List Click a portfolio name to view all the objects in that portfolio
This object is a member of the following portfolios:

Your current search criteria is: Portfolio is "Drawings-American" and [Objects]Display Creator is "Virginia Sterrett".