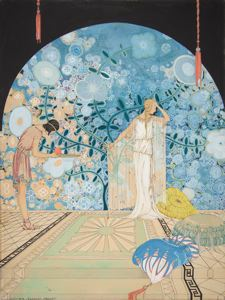 
Object Type: DRAWINGS
Creation Place: North America
Medium and Support: Gouache, pen and ink on illustration board
Credit Line: Purchased with funds from the Art Angels
Accession Number: 15-D-459
"'I shall not touch it, I assure you,' said she"
Page 200, "Tanglewood Tales" by Nathaniel Hawthorne (Philadelphia: Penn Publishing, 1921)

Art Nouveau was a short-lived but popular art movement in the late 19th and early 20th century in America and Europe. Prosperina Refuses the Pomegranate characterizes the Art Nouveau style with its asymmetry, contrasting colors, flat yet ornate patterns, and rhythmic movement of the branches that flow and curl in the background.
This illustration for the Tanglewood Tales, a childrenâs mythology book, tells the story of Proserpina, the Roman goddess of spring, who has been kidnapped by Pluto, the god of the Underworld. While the story is hardly a feminist one, Sterrett portrayed her as the femme nouvelle (new woman), the ideal Western woman who rejects traditional femininity. As depicted by a female artist, Proserpina has agency and refuses Plutoâs hand in marriage. The asymmetry places more objects on Proserpinaâs side, suggesting her strength. Pluto may have all the riches and the power in the Underworld but Proserpina is the one refusing to give him what he wants most.

Your current search criteria is: Portfolio is "Drawings-American" and [Objects]Display Creator is "Virginia Sterrett".