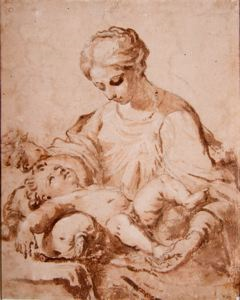 The Madonna of the Rose


Object Type: DRAWINGS
Creation Place: Europe
Medium and Support: Ink washes over black chalk on paper
Credit Line: Gift of Mr. and Mrs. James R. Tanis in honor of Caroline Wistar
Accession Number: 06-D-428
Bedoli was a 16th century Italian painter and draughtsman, trained under Parmigianino, who became the most sought-after painter in Parma following Parmigianinoâs death. His work, though distinguishable from his teacherâs work, is often confused with that of Parmigianino. Bedoliâs paintings mostly consist of altarpieces and frescoes. Like Parmigianino, Bedoli produced numerous preparatory sketches for his paintings, such as this one of TheÂ Madonna of the Rose. Bedoliâs work is marked by a subtle inclusion of atmosphere and psychological insight.

Conservation
- 2009 - In need of conservation - Included in IMLS survey
For more information: http://artmuseum.lasalle.edu/exhibits/show/conservation-surveys/drawings/the-madonna-of-the-rose
Dimensions
Portfolio List Click a portfolio name to view all the objects in that portfolio
This object is a member of the following portfolios:

Your current search criteria is: Portfolio is "Drawings-European" and [Objects]Display Creator is "Girolamo Mazzola Bedoli".