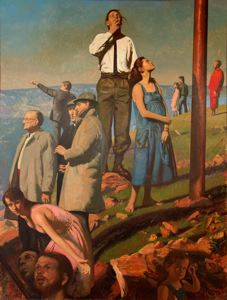 
Object Type: PAINTINGS
Creation Place: North America
Medium and Support: Oil on canvas
Credit Line: Commissioned by La Salle University Art Museum
Accession Number: 89-P-360
The title, Exodus, refers to the Biblical story of the Israelites who fled from their enslavement. The central theme of this painting seems to be the search or journey for secular and spiritual knowledge undertaken by youth, especially during their college years. The successive stages of this journey are referred to by the various poses and expressions of the figures as they move up the hill in a rhythmical swing upwards from the lower right corner: from the bewildered toddler and youths at the bottom; to the young man standing at the top center, who seems captivated or inspired; and finally to the woman in red on the far right, with the glow of light above her head, who has reached the end of her journey toward wisdom. The four older men on the side of the hill serve as the teachers and guides along the journey. The message is one of hope, wonderment, and spiritual renewal for persons of all faiths.

This painting was commissioned by La Salle and subjects were gathered to provide a cross-section of the University community: Professors Claude Koch, Joseph F. Flubacher, and Brother Francis McCormick are grouped together on the left; retired counselor Rosa Lee Smith stands at the top of the hill in red; Dr. Joseph Kane, former Dean of the Business School, stands on the left side of the hill with arm pointing; students Rachel Ravasco and Dave Weems stand on the hill in the middle background. Other La Salle students, professors, and staff members portrayed in the far background include Frank McLaughlin, Joanie Hasson, Brother Mike Andrejko, Brother Arthur Bangs, Mary Morrow Farrell, and Ann Shields. The two central figures at the top of the hill and those in the foreground are friends of the artist; his son is in the lower right corner. The composition began with the artist posing and taking photographs of the figures on the lawn of the Peale House one spring day in April 1989.


- Triptych, Curated by Caroline Wistar, La Salle University Art Museum, March 20th â May 31st, 1990.
Portfolio List Click a portfolio name to view all the objects in that portfolio
This object is a member of the following portfolios:

Your current search criteria is: Portfolio is "Pennsylvania Artists" and [Objects]Century is "20th Century" and [Objects]Display Creator is "Bo Bartlett" and [Objects]Object Type is "PAINTINGS".