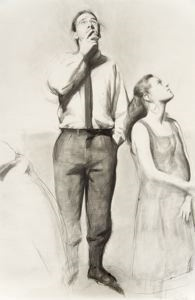 This drawing of Central Figures at the Top of Hill was a study for a series of large paintings in Olney Hallâs main entrance. This triptych, entitled Exodus, features some of La Salle Universityâs faculty and students, such as Brother Francis McCormick and Dr. Joseph Kane. The two central figures represented in this drawing are close personal friends of the artist. In April of 1989, Bartlett gathered his subjects at Belfield Farm to take photographs for this composition. Bartlettâs ideas for his paintings typically arise from recurring dreams which he usually works out in sketches. The idea behind Exodus is that humans are set free from ignorance through the enlightenment of education, and the hope of renewal with an understanding of faith.

- Triptych, Curated by Caroline Wistar, La Salle University Art Museum, March 20th â May 31st, 1990.
Dimensions
Portfolio List Click a portfolio name to view all the objects in that portfolio
This object is a member of the following portfolios:

Your current search criteria is: Portfolio is "Pennsylvania Artists" and [Objects]Century is "20th Century" and [Objects]Display Creator is "Bo Bartlett".