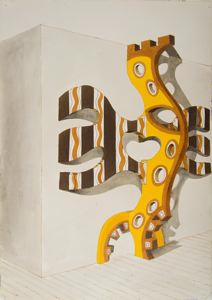 Searles was an important African American artist from Philadelphia, educated at PAFA, who was active from the 1960s until his death. He traveled to West Africa in the 1970s, at a time when many African American artists were exploring their ancestral African roots. His artwork reflected not only the changing social times but also his evolving vision as an individual who came to embrace universal cross-cultural connections. He created paintings and sculptures that responded to African, Japanese, and Indian cultural traditions, and that often included abstract references to music as well as dance. Many of his abstract works seem to have a life of their own, evoking visual associations with human and animal forms. In this ink wash rendering for a sculpture, he presents a ladder-like form which rests against the wall, but also seems to be emerging from it, creatively playing with notions of space and animation.

Your current search criteria is: Portfolio is "Pennsylvania Artists" and [Objects]Century is "20th Century" and [Objects]Display Creator is "Charles Robert Searles".