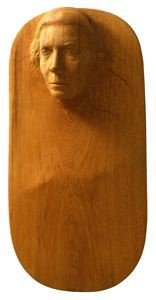 As Dorothy Dayâs elderly face thrusts forward, I am struck how her determined jaw, her smooth mouth and nose contrast with a deeply gouged skull, roughhewn cheeks, scarred-over eyes.

The mystery of the poor. They are Jesus for us; what we do for them, we do for him. Day did not see Jesus in the poor with bodily eyes, but eyes of faith. A blinded oracle, scored eyes of wood speak of deeper sight.

Francis of Assisi suffered terribly from diseased eyes. Day re-embodied Francisâs example, renewing his charism of holy poverty in herself for our
modern cities and farms.

Your current search criteria is: Portfolio is "Pennsylvania Artists" and [Objects]Century is "20th Century" and [Objects]Display Creator is "Charles Wells".