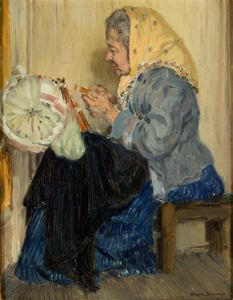 Born in Torricella, Italy, D'Ascenzo immigrated to the U.S. in 1882 where he became the founder of D'Ascenzo Stained Glass Studio in Philadelphia. This internationally renowned studio, inspired by the medieval guild system, continues today in Merion, Pennsylvania.

With the exception of design studies undertaken at the Scoula Libera, Rome, for a brief period, all of DâAscenzoâs formal training was at American institutions: The Pennsylvania Academy of Fine Arts, The Pennsylvania Museum School of Industrial Art, and The New York School of Design. Although he gained considerable reputation as an oil and watercolor painter, he is most widely remembered for his stained glass designs. His work may be seen in such well-known buildings as Valley Forge Memorial Chapel; Riverside Church, New York; the National Cathedral, Washington, DC; the Chapels of Yale and Princeton Universities; and the Fidelity Trust Company, Philadelphia.
Current Location: Art Museum : 20 C Hallway

Your current search criteria is: Portfolio is "Pennsylvania Artists" and [Objects]Century is "20th Century" and [Objects]Display Creator is "Nicola D'Ascenzo".