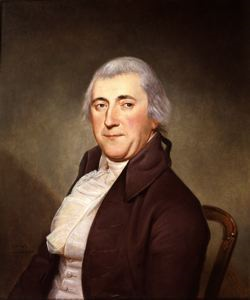 
Object Type: PAINTINGS
Creation Place: North America
Medium and Support: Oil on canvas
Accession Number: 90-P-371
Charles Willson Peale (1741-1827) - painter, patriot, writer, inventor, farmer, scientist, naturalist, and founder of one of Americaâs first museums - is one of the best-known past residents of the land now occupied by La Salle Universityâs campus. Peale resided at his "retirement" home, Belfield estate, in northwest Germantown from 1810 to 1821, and his house still stands on our campus as a National Historic Landmark.

David Gelston (1744-1828) was a prominent New York City businessman and politician, who served as a representative from New York in the Continental Congress of 1789, the last under the Articles of Confederation. The 47-year-old Gelston was a member of the New York State Senate when he commissioned Peale to paint his and his wife and child's portraits in 1792.
Current Location: Art Museum : 18 C Gallery


- New Acquisitions, La Salle University Art Museum, Fall, 1990.
Keywords Click a term to view the records with the same keyword
This object has the following keywords:
Portrait
Portfolio List Click a portfolio name to view all the objects in that portfolio
This object is a member of the following portfolios:

Your current search criteria is: Portfolio is "Pennsylvania Artists" and [Objects]Display Creator is "Charles Willson Peale".