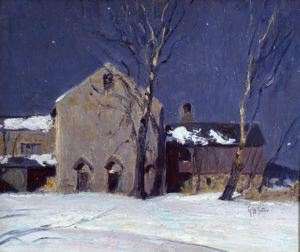 Sotter was a Bucks County Impressionist known for moonlit landscapes and cloudy skies. He was originally from Pittsburgh and discovered Bucks County while a student at the Pennsylvania Academy of the Fine Arts (PAFA) in 1902. On completing his studies, Sotter returned to Pittsburgh and went into partnership in a stained glass studio. During this time, he also held a nine-year Assistant Professorship in painting and design at the Carnegie Institute of Technology. Sotter returned to Bucks County in 1919, where he settled permanently and continued to paint and take stained glass commissions.
Current Location: Art Museum : 20 C Hallway

- Recent Acquisitions, Curated by Caroline Wistar, La Salle University Art Museum, September â October, 1989.
Dimensions
Portfolio List Click a portfolio name to view all the objects in that portfolio
This object is a member of the following portfolios:

Your current search criteria is: Portfolio is "Pennsylvania Artists" and [Objects]Display Creator is "George William Sotter".