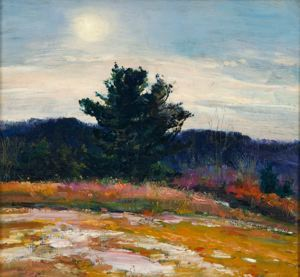 A native of Philadelphia, Sloan began attending classes at the Fleisher School of Art when he was 11 years of age. He was the first African American to teach painting at the Pennsylvania Academy of the Fine Arts (PAFA), from 1962-1997. During this period, he also worked as a Painting Conservator at the Philadelphia Museum of Art. In his retirement, Sloan devoted much of his time to painting landscapes infused with a poetic and ephemeral atmosphere, but also evocative of a particular season, as in this winter scene in the pine barrens of New Jersey.
Current Location: Art Museum : 20 C Hallway

Your current search criteria is: Portfolio is "Pennsylvania Artists" and [Objects]Display Creator is "Louis B. Sloan".