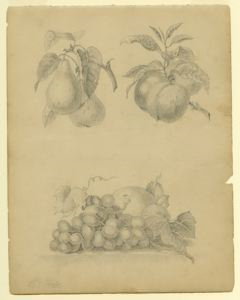 Composition with Apples, Pears, and Grapes

Mary Jane Peale was the daughter of Rubens Peale and the granddaughter of Charles Willson Peale, part of the important Peale family of painters active in Philadelphia and along the East Coast. Her parents settled in Pottstown in 1841. She studied with Thomas Sully, and her uncle Rembrandt Peale, then became a portrait painter in New York. When she returned to Philadelphia to care for her ailing father, she shifted her focus to still life paintings. Later, she took life drawing classes with Thomas Eakins at the Pennsylvania Academy of the Fine Arts. She is known for her portraits and still life paintings, which were inspired by those of her great uncle, James Peale. Her drawings of three clusters of fruit in Apples, Pears and Grapes were likely made as studies for her still life paintings.

- American Originals: Works on Paper from the Permanent Collection, Curated by Dr. Klare Scarborough and La Salle University Associate Professor of Art History Dr. Catherine Holochwost, La Salle University Art Museum, December 16, 2015 through March 4, 2016.
Dimensions
Portfolio List Click a portfolio name to view all the objects in that portfolio
This object is a member of the following portfolios:

Your current search criteria is: Portfolio is "Pennsylvania Artists" and [Objects]Display Creator is "Mary Jane Peale".