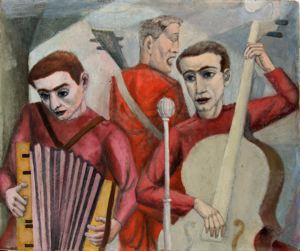 Jerome Kaplan lived and worked in Germantown. His early studies at the Philadelphia Museum School of Industrial Arts (now University of the Arts), were interrupted by World War II. He enlisted in the U.S. Army after his junior year and returned to earn a diploma in 1947, after serving as a medic from 1942-1945. Kaplanâs former professor, Benton Spruance, hired the young graduate to assist in teaching lithography at the Philadelphia Museum of Art in the fall of 1947. Spruance then hired Kaplan to teach intaglio at his alma mater in 1955. He was appointed Professor and Chair of Printmaking in 1965 and continued working at the University of the Arts until he retired in 1987.

Kaplanâs professional accolades include Guggenheim and Tamarind Fellowships and an Outstanding Educator in America award. He had 21 solo shows between 1950 and 1994 and showed in group shows at the Whitney Museum of American Art, the Philadelphia Museum of Art, and the National Gallery of Art.
Current Location: Art Museum : 20 C Hallway

Your current search criteria is: Portfolio is "Pennsylvania Artists" and [Objects]Object Type is "PAINTINGS" and [Objects]Century is "20th Century".