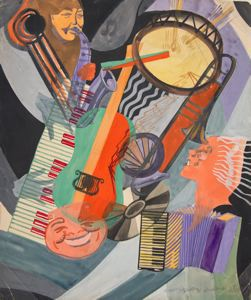 Carter was an African American painter known for his colorful scenes of city life. Born in St. Louis, Missouri, he moved to Chicago in 1930 to study at the Art Institute of Chicago and the University of Illinois. He was involved in the Chicago Renaissance of African American arts during the 1930s, and he also taught at the South Side Community Art Center. In 1940, he exhibited his work at the important Exhibition of the Art of the American Negro (1851-1940) in Chicago, organized by Alonzo Aden and Alain Locke. He also became involved with the WPA mural program during the 1940s.

This gouache painting was made for William McBride; another African American artist who trained at the Art Institute who became involved in the Chicago Renaissance. In representing Chicago Jazz, Carter combines various musical instruments and figures into a Cubist-inspired assembling of forms.

Your current search criteria is: Portfolio is "African-American Artists".