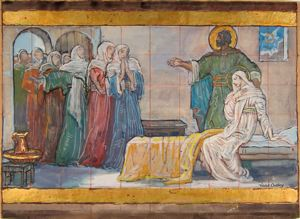 Great Women of the Bible, "The Raising of Dorcas by Saint Peter", final sketch

From 1945-1949 Oakley worked on 10 designs for the series Great Women of the Bible murals for the First Presbyterian Church in Germantown. For each design, she completed a series of preliminary sketches, figure studies, and scaled drawings prior to executing the final mural painting.

In the biblical story, Dorcas is described as a mathetria, meaning âfemale disciple.â She is the only woman in the bible given that title because of her strong family values, commitment to her community, and faithfulness as holy woman. The drawing on bottom depicts the story of her rising from the dead surrounded by friends and family after Saint Peter had visited and prayed over her. After a time, he commands her to waken, extending his hand to help her rise as she opens her eyes.

In the late 19th and early 20th centuries, the feminist âNew Womanâ movement encouraged women to become entrepreneurs in their professional education and careers. Violet Oakley and several other female artists lived together at the Red Rose Inn in Villanova to pursue the creation of âart for artâs sake.â Oakley and her friends later moved to a home in Mount Airy which they called Cogslea, now listed on the National Register of Historic Places. Known collectively as the âRed Rose Girls,â these artists strived to be independent and to help raise the value and opinion of womenâs artwork.
Current Location: In Storage

- American Originals: Works on Paper from the Permanent Collection, Curated by Dr. Klare Scarborough and La Salle University Associate Professor of Art History Dr. Catherine Holochwost, December 16, 2015 through March 4, 2016.
Dimensions
Portfolio List Click a portfolio name to view all the objects in that portfolio
This object is a member of the following portfolios:

Your current search criteria is: Portfolio is "Exhibition - American Originals" and [Objects]Display Creator is "Violet Oakley".