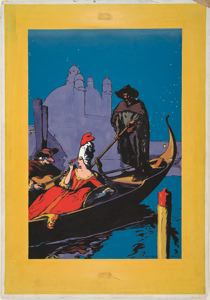 Jones was a 20th century Philadelphia painter and illustrator. He was a frequent contributor to Scribnerâs Magazine covers, producing several images for the popular journal. His illustrations are marked by their bold design, with thick outlining and broad flat areas of color. This painting of a masquerading couple riding in a Venetian gondola down the Grand Canal is suggestive of a romantic European experience and was likely made to illustrate a fiction story in Scribnerâs Magazine.