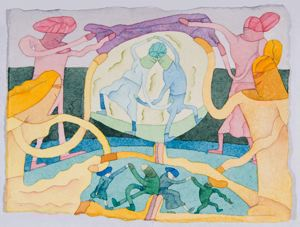 Born in Chicago, Nilsson attended the Art Institute of Chicago where she would develop her representational style. There she met her husband Jim Nutt, and the two became involved in the Chicago Imagists during the 1960s and 1970sâChicago artists who turned towards figural imagery, often laden with fantasy and strangeness. There were three distinct groups of Chicago Imagists which exhibited at the Hyde Park Center. Both Nilsson and her husband were part of the âHairy Whoâ group with four other artists, exhibiting together from 1966 to 1968. In 1973 Nilsson was the first âHairy Whoâ member to have her own solo show. In Holding a Dance, Nilsson combined watercolor techniques with the exaggerated forms of Surrealism, creating a strange chaotic scene of faceless rubber-limbed figures in movement.