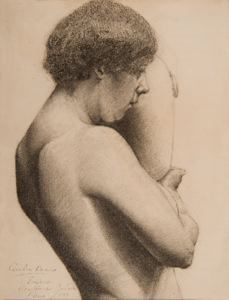 Young Man with An Urn

Beaux was an important American portrait painter and educator. Born in Philadelphia, as a youth she took portrait lessons with a relative, Catherine Ann Drinker, who owned a portrait studio. Beaux began taking art classes at the PAFA in 1876. She studied with PAFA director, Christian Schussele, rather than with Thomas Eakins, whose progressive views on life drawing class were very controversial. She traveled to France in 1888-1889, studying at the AcadÃ©mie Julian and the AcadÃ©mie Colarossi in Paris. She then returned to Philadelphia, where she established herself as a professional portrait painter. She became the first woman to join the teaching staff of PAFA in 1895.

According to the inscription at the bottom left, this drawing was made at the AcadÃ©mie Julien in Paris in 1889. Beaux likely created the image as part of a life study class that featured a nude model. At the time, women were not permitted to enroll into French art academies such as the Ãcole des Beaux-Arts, but the AcadÃ©mie Julien provided female students with an alternative education and training.

Conservation
- 2011 - Conserved with funds from the Art Angels
For more information: http://artmuseum.lasalle.edu/exhibits/show/conservation-treatments/drawings---watercolors/eugene-holding-an-urn
Exhibitions