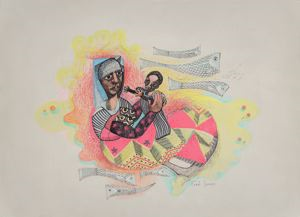 Originally from Georgetown, South Carolina, Jones began drawing at five years old. After his family moved to Atlanta, Georgia, Jones continued to develop his artistic skills under the tutelage of noted African American artist Hale Woodruff, who taught at nearby Spelman College. While he pursued training to become a professional artist, he also worked for the Coca-Cola Company to earn a living. The C.E.O. of Coca-Cola, recognizing Jonesâ talent, transferred him to the Chicago plant in 1940 and sponsored his studies at the Art Institute of Chicago. From 1943 to 1946, Jones paused his artistic studies to serve in the U.S. Navy. After World War II, he resumed his work at the Coca-Cola factory as well as exhibited and sold his artwork successfully on the side. Around 1973, Jones retired early from Coca-Cola with a full pension in order to devote himself full-time to his art.

Jonesâ distinctive artistic style is characterized by a Neo-Romanticism that often borders on Surrealism. Like many other African American artists of his time, he looked back to the arts of Africa for inspiration, particularly beginning in the 1950s. With The Young Fisherman, Jones combined biblical references to Mary and the Christ Child, and the symbolism of Christ as a fisherman; with the image of a black Madonna bearing mask-like features resembling Yoruba sculpture from Nigeria, suggestive of a Pan-African aesthetic.