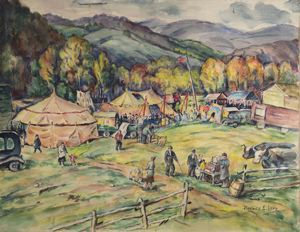 Originally from Chicago, Levy took classes at the Art Institute of Chicago; then in 1915 she traveled to Provincetown and New York City where she studied printmaking. In the 1930s she worked for the Illinois Art Project of the WPA, which is where she probably painted Circus Comes to Town. The subject of the traveling circus was popular among American Scene painters and was illustrative of the historical shift that took place after World War I, as American artists turned inward to portray scenes of American life which were relevant to and appreciated by their American audiences, including Americans living in rural areas of the Midwest.