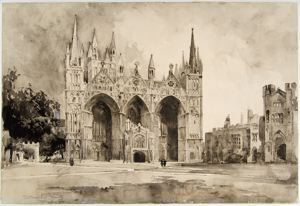 Joseph Pennell was born to a Philadelphia Quaker family, and attended Germantown Friends School and PAFA. He spent much time traveling and working in Europe and, like his close friend James Abbott McNeill Whistler, he later made his home in London. During his lifetime, Pennell was a prolific artist and produced more than 4,700 drawings, 900 etchings and mezzotints, and 600 lithographs. He had numerous books published, both as an author and as an illustrator, many of them in collaboration with his wife, Elizabeth Robins Pennell. His publications include several books on drawing and printmaking, as well as a biography of Whistler that he wrote with his wife in 1908. The Pennells moved back to the United States during World War I and settled in Brooklyn.

Pennellâs drawing Peterborough Cathedral - The West Front served as an illustration of Mariana Griswold Rensselaerâs articles for The Century Magazine about cathedrals of England and France. His academic training is evident in his precise rendering of the cathedralâs architecture.