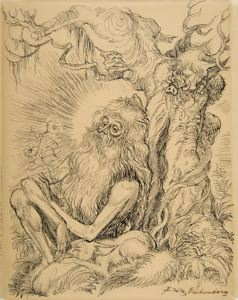 A public critic of Nazism, Eichenberg left his German homeland in 1933 and immigrated with his family to New York City where he became employed by the Federal Art Project. He taught art at the Pratt Institute and the University of Rhode Island, and he became a prolific illustrator who produced many artworks that addressed themes of social justice, non-violence and spirituality. Although he grew up in a non-religious family, Eichenberg was attracted to Taoism, Zen Buddhism, and Quakerism. He joined the Religious Society of Friends in 1940 and later contributed illustrations to Dorothy Dayâs newspaper, The Catholic Worker. Eichenbergâs drawing of Ecclesiastes was reproduced in an edition of wood engravings, and demonstrates the artistâs expressive and non-traditional approach to religious subject matter.

Conservation
- 2015-2016 - Conserved with Support from the Stockman Family Foundation
For more information: http://artmuseum.lasalle.edu/exhibits/show/conservation-treatments/drawings---watercolors/ecclesiastes