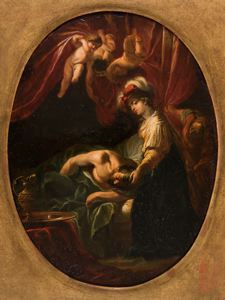 
Object Type: PAINTINGS
Creation Place: Europe, Italy
Medium and Support: Oil on Copper panel
Accession Number: 78-P-225
Judith, a Jewish widow and noblewoman, approached the general of the Assyrian army, Holofernes, who was laying siege to her town. Her beauty captivated him and he was persuaded to drink too much wine. When he was drunk, Judith decapitated him. Having seen what she had done, the townsfolk drove the Assyrian army away. The story is frequently seen as an allegory of triumph of Judaism over paganism. The artist here shows Judith just before the bloody beheading.
Current Location: Art Museum : 15-16 C Gallery

Your current search criteria is: Portfolio is "Religion in Art: Old Testament" and [Objects]Country is "Italy".