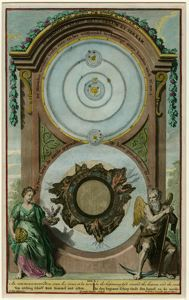 Thanks to Copernicus and others, the planet earth was eventually dislodged from its position in the universeâs center. In the top half of this illustration, the planets now encircle the sun, and satellite moons orbit some individual planets. Below, a fiery molten core activates the formation of the earthâs crust. This image illustrates the biblical story of the creation of the universe through the perspective of 18th-century scientific knowledge.
Current Location: Storage : Works on Paper : 14x18 : 2.3.42

Your current search criteria is: Portfolio is "Religion in Art: Old Testament" and [Objects]Display Creator is "Gerard Hoet".