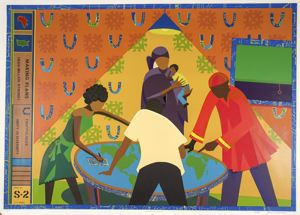 
Object Type: PRINTS
Creation Place: North America
Medium and Support: Serigraph
Credit Line: Purchased with funds provided by the Art Angels
Accession Number: 16-G-4980
Riddle was born in Los Angeles, CA, and attended California State University, where he also earned a B.A. in education and an M.A. in Fine Art. He taught art in the Los Angeles public schools in the late 1960s and early 1970s, then in 1974 he moved to Atlanta, GA, to teach at Spellman College. Later in his life, he became a curator at the California African American Museum in Exposition Park.

After the Watts Riots of 1965, Riddle came to see art as an opportunity to educate young African Americans about their history. In this print, Making Plans, four adult figures stand over a table covered with a large map of world, under a bright overhead light. The woman on the left uses a pen to sketch an architectural diagram. The patterns on this diagram are replicated in the edges of the table, in the horseshoe shapes on the wall, in the window frame, and in the outer border of the print. These patterns may also be associated with maps of the Underground Railroad, as seen in Riddleâs other print from the same year, Carrying Out Plans.