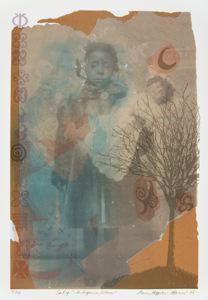 Sankofa "The Differences Between"


Object Type: PRINTS
Creation Place: North America
Medium and Support: Screen print
Credit Line: Purchased with funds provided by Thomas Blum
Accession Number: 14-G-3622
Appelin-Williams was born in San Antonio and raised in Cuero, TX. She received a B.A. from the University of the Incarnate Word and an M.A. from Trinity University, both in San Antonio. In this print, she explores the theme of Sankofaâa West African word from Ghana that means âlearning from the pastâ which is often represented through visual symbols and linked with proverbs in Akan and Asante art. Here the artist uses visual layering techniques to allude to the past, present, and future happening simultaneously, overlaid with various Asante âAdinkraâ symbols. The central image of an African American girl holding a black doll derives from an early 20th century photograph which she found in an abandoned house. The layering effect, created through a sequence of 19 silkscreens, suggests parallel universes, with the image of the young girl slipping in between realities. The work also contains other kinds of symbolism: the color indigo alludes to the Middle Passage; the color red connotes life or blood; and the tree suggests life, death, rebirth, and family.