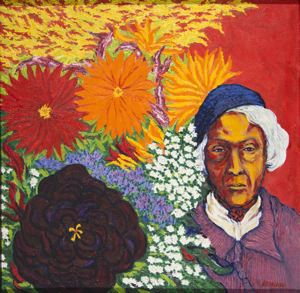 
Object Type: PAINTINGS
Creation Place: North America, United States, Pennsylvania
Medium and Support: Oil on canvas
Credit Line: Purchased with the Benjamin D. Bernstein Acquisition Fund and the Art Angels Fund
Accession Number: 17-P-593
This Philadelphia-born artist focused his life around art and helping the community around him. Edmonds studied at the Philadelphia Museum College of Art (now University of the Arts). He became an art instructor in the Philadelphia and Wilmington public schools, and he later became a consultant and instructor at the Brandywine Workshop. Edmonds was also involved with the Church of the Advocate in North Philadelphia, which has historically been a strong supporter of social justice and civil rights. From 1973 to 1976, he collaborated with fellow painter Richard Watson in creating bold and riveting murals for the Church of the Advocate.

Many of Edmondsâ paintings were inspired by African American experience, spirituality, biblical passages, and jazz. With Untitled (Woman with Flowers), Edmonds juxtaposes the austere and furrowed face of an elderly woman with a riotous and vibrant display of flowers that embraces her body in their overflowing extravagance.