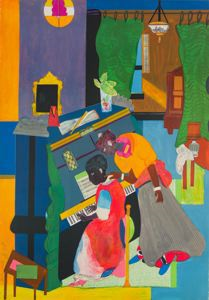 
Object Type: PRINTS
Creation Place: North America
Medium and Support: Color lithograph
Accession Number: 85-G-1337
Born in Charlotte, NC, Bearden grew up in New York and Pittsburgh, and graduated from New York University in 1935. He then studied with German artist George Grosz at the Art Students League of New York, while supporting himself as a political cartoonist for African American newspapers. He served in the U.S. Army during World War II and later studied in Paris and traveled extensively. His work became very abstract in the late 1950s and was often laden with spiritual symbolism, particularly in relation to African American life. He began to make collages in the early 1960s and was a founding member of The Spiral, an African American artistic and activist group. His work reflects the influence of Western art, African sculpture, Japanese prints and Chinese paintings.

In Piano Lesson, Bearden depicts a teacher standing over a student while giving a lesson. The image was inspired by the Pittsburgh jazz pianist Mary Lou Williams and was originally featured on a poster for a dance and musical collaboration between Bearden's wife Nanette and Williams. Recalling a 1917 painting by the same name by Henri Matisse, Beardenâs image later inspired a Pulitzer prize-winning play by August Wilson in 1990.

- Africana, Curated by Madeleine Viljoen, La Salle University Art Museum, February â March, 2005.
Dimensions
Portfolio List Click a portfolio name to view all the objects in that portfolio
This object is a member of the following portfolios: